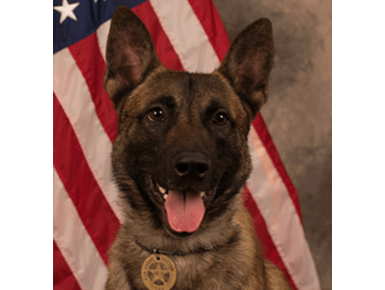 Officer Braden Kelly began his law enforcement career with the Elk Grove Police Department in January of 2014, after graduating the Sacramento Regional Public Safety Training Academy. Officer Kelly has been assigned to patrol, serving the citizens of Elk Grove, since being hired. During his time at EGPD, he held the position of SWAT Operator for a short time before being selected as a K9 Handler.
After Officer Kelly was selected as a K9 Handler, he helped select his new K9 partner, K9 Jax. K9 Jax is a male Belgian Malinois born January 6th, 2016. K9 Jax was born, raised, and trained in France before being flown to America. Once in America, Gold Coast K9 (canine vendor) in Ventura, CA trained K9 Jax for an additional 5 weeks before being selected by Officer Kelly.
Officer Kelly began training with K9 Jax and POST certified in February 2018. Officer Kelly and K9 Jax completed their patrol training in March 2018 and became patrol certified.
During Jax’s days off, he enjoys spending time with Officer Kelly and his family, going to the park, and chasing his favorite toy.