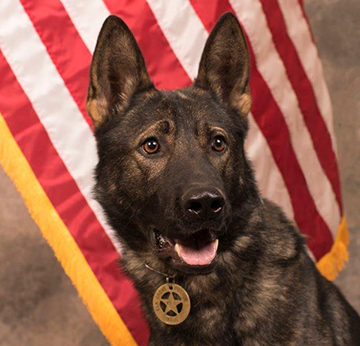 Argo is a 3 year old male German Shepherd. He was born in the Czech Republic.  K9 Argo joined the Elk Grove Police Department Canine Unit in 2014, previously handled by Officer Moore.    K9 Argo has been assigned a new partner, Officer Gregorio. Officer Gregorio has been in law enforcement since January of 2013 starting his career with the San Joaquin County Sheriff’s Department.  He transferred to the Los Rios Police Department prior to joining the Elk Grove Police Department in May of 2015.  Officer Gregorio has been assigned to patrol his entire career.  Officer Gregorio completed his K9 Handler Training in December of 2016. K9 Argo is trained for patrol duties and will later be trained for detection work.  K9 Argo’s responsibilities and certifications include handler protection, article (evidence) searches, area searches, tracking, criminal apprehension, public relations demonstrations and other patrol activities.  K9 Argo is never far from his favorite Kong.  He is social and likes to get his fans to give him a good scratch behind the ear. K9 Argo and Officer Gregorio are proud to serve the City of Elk Grove and always stand ready to serve and protect.
We use cookies on our website to give you the most relevant experience by remembering your preferences and repeat visits. By clicking “Accept All”, you consent to the use of ALL the cookies. However, you may visit "Cookie Settings" to provide a controlled consent.
Cookie SettingsAccept All
Manage consent